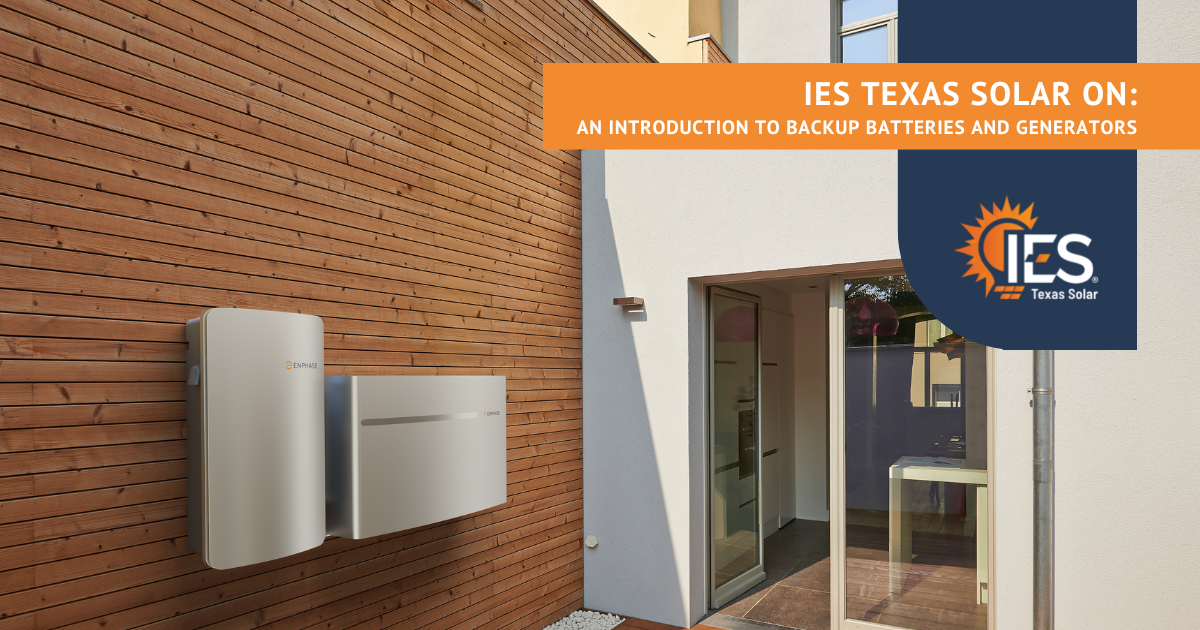 At some point, most people spy a house with the tell-tale black gloss of a solar panel that’s basking in the sun on the roof of someone’s home or business. But how often do they think of everything beneath that shiny, high-tech energy producer? Do they consider what happens during a power outage and think that those panels will keep the power running when the grid goes down?

While solar panels are easy to spot, the equipment that customers need in order to get the most out of their solar powered systems is a little harder to spy.

Today, we take a look at two important additions to any Solar Powered System: batteries and generators. We are joined again by IES PV Design Engineer Kevin Marceski, who brings in his knowledge and expertise to show us just how important these types of equipment are.

What’s the Deal with Batteries and Generators?

To some, it may come as a big surprise that just having solar panels on your roof won’t keep you from being without power when there is an outage. In truth, many people may think that the solar panels might do all of the work, but this definitely isn’t the case. Almost any Solar Powered System, be it residential or commercial, needs backup batteries and/or a generator in order to keep the lights on when the grid fails. It hasn’t always been a main focus when buying solar, but as Kevin tells us, the times are changing.

“It used to be that batteries and generators were the ancillary products for solar in the past, but more and more these days it has become something that’s really been pushed to the forefront. I’m super excited that this is the case, because if PV is seen as this exciting, futuristic technology, then batteries and the addition of a generator is just kind of the next step forward into that future.”

A Big Question: Why Can’t Just Installing Solar Panels Handle it All?

The short answer? It depends on what you want.

“It really depends on what you’re trying to get out of the PV project especially when it comes to commercial versus residential. One of the ways I like to put it to people is that without the batteries and generators on a typical sunny day if you have solar, the utility company is your battery backup. You’re generating energy to power your own home and that’s the primary purpose of the solar panels, but if your home is not consuming as much power as those panels are producing then there is still excess power being generated there.”

“Electricity gets fed back into the utility company and gets distributed to the nearest path of least resistance from wherever it enters the power grid. This is how, even without batteries, a PV installation never wastes the power it is generating. A lot of times when it comes to grid-tied projects, it’s being put to good use throughout your community. I don’t know if a lot of people realize that with solar. Folks often know that all that power is benefitting them first, and that they’re also making money off of it by selling it to the utility company, but the utility company is putting it to good use by making sure they basically have a power plant right in your own neighborhood. You are that power plant, you’re helping supply power to the rest of your neighbors.”

In a way, you become a type of mini-power plant when you produce excess energy. In truth, having a Solar Powered System actually eases the strain on power plants, and you end up helping out people living close to you.

“It helps utility companies in a way that, you know, they might have a central power plant that is powered by natural gas or, god forbid, coal or something like that, you know, tens or hundreds of miles away, but if you’re a local producer then you are technically one of their power plants. You’re helping sustain that power level throughout your local community. Electricity is always going to follow the path of least resistance, so if you’re producing power right next to your neighbor, it doesn’t make sense for your neighbor to pull power that’s being generated miles and miles away. They’re going to take the power that you’re generating that is in excess of what you’re already using. I do want to make it clear that your panels are powering your house first, and then helping your neighbors, helping the grid, all while making you money.”

This is great news for those who already own a Solar Powered System or are interested in switching to one. Being able to reduce energy demand on the grid while powering your own home is an impressive benefit. Speaking of the power grid in Texas, Kevin addresses the electric elephant in the room.

“Unfortunately, the grid isn’t always up. You can’t always depend on them to be your ‘battery’ for that excess power that’s being generated. That’s why you go out and purchase your own battery and make sure that you can make your own stable microgrid without relying on the broader utility grid that’s all throughout our society. You’re depending on your own small, self-generated microgrid instead. It’s a special thing for people to realize that they’re completely self-sufficient on their own property in their own home.”

So now we know that solar panels are fantastic, but they don’t do it all. Now that we’ve covered what solar panels do and how your home becomes a type of microgrid, it brings up the next big question.

Why should someone install batteries and a generator?

“Let’s start with the generator. Generators are a tried and true technology that have been around for a long time. They are typically cheaper and that goes with the fact that they’ve been around longer. They have a more substantial supply chain and there are more companies that are making generators than batteries. That saturation kind of keeps that price down. You turn on a generator and as long as it’s sized properly you know that it’s going to power whatever it needs to power. There isn’t much of a balancing act that needs to go into that. What I would say for people that are trying to decide between batteries and generators is that a generator is very reliable. In a lot of cases, you’re going to be able to power your home with a generator with a lower up-front cost than you would with a battery. That’s obviously changing now, and batteries are becoming a new wave for a lot of customers even though batteries for solar have been around for decades.

The technology is becoming more sophisticated and consumer focused where it used to just be the fringe folks who were trying to power an off-grid cabin in the middle of the woods and you really had to dig into the engineering side of balancing those batteries with loads and balancing them with a power generation source whether that’s solar or something else. It was definitely not as consumer friendly, and that has been changing considerably over the last ten years or so.”

“A lot of folks that think about installing solar or batteries or generators, the original idea that everything focuses on is that they’re trying to become self-sufficient. They want to get off the grid so to speak and not have to rely on, particularly in Texas, the energy grid that hasn’t always been there for them. I think the last few years have proven that to be the case, and not even just with that February freeze that we had a year ago, but in rolling blackouts and brownouts. We’re seeing blackouts now on typical summer days even without the threat of a natural disaster or other extenuating circumstances. And of course there are the cases where there is a storm and, depending on your location in the state, your power can just go out. I think a lot of people are trying to make themselves more sustainable in that way without relying on the grid. A generator is a great and simple way to do that.

In a lot of cases, most homes are going to be more than well powered with a 20kw generator or a 24kw generator, something of that size will be able to turn on most of, if not all, the loads in your house and keep them running for a solid day or two. That’s something that I think is simple and very straightforward. You install the generator, fill it with fuel, connect it to your panel, and when an outage happens it’ll turn on and everything will continue as normal. That reliability is something that shouldn’t be understated. Where I think batteries come in and take priority is when you consider the fuel source.”

“With the current economic trends, I expect the price of batteries to come down. The upfront cost for the battery is higher than it is for the generator. Generators are going to be cheaper, but when you buy a battery, especially a battery that’s coupled with solar, that one-time investment is likely the only cost that you’re going to be putting into that system. With a generator, every time you use that generator, it’s burning up fuel that’s not being renewed by itself. You have to go in and refuel it yourself, or in a lot of cases folks are using a natural gas line that they already have installed in their home. They’re feeding that generator constantly from their utility company. But in that same case, anytime you’re using a generator you’re obviously depending on your utility at that point and you’re also building up that gas bill at the same time. That cost is continually going to go higher and higher, but with the Solar Powered System with the battery, your fuel source is on your roof and isn’t costing you anything to keep on refueling those batteries.”

At this point, we’ve covered some useful facts about how solar panels work with batteries and generators as well as what consumers need to consider when they want backup power. In part 2, we’ll be exploring the types of batteries IES Texas Solar uses, how they have the edge when it comes to using them in a design, and finally, what might be the most interesting (and important) part of this technology: inverters.

Kevin is a PV design engineer with IES and has worked on thousands of systems over the course of his career.