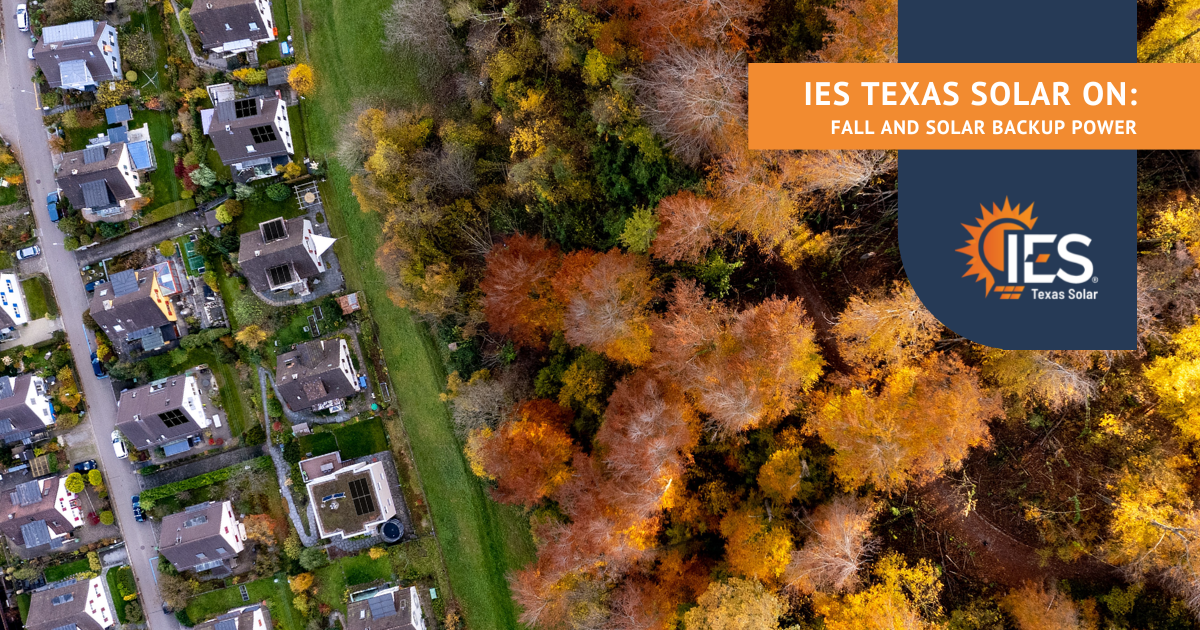 With fall fast approaching, temperatures are finally starting to drop ever so slightly. Before long, Texas will (hopefully) have chilly weather and overcast skies. What does this mean for solar owners? It means that backup power for your home or office is going to be much more relevant when the sun isn’t shining.

When you make the switch to a Solar Powered System, installing backup batteries and/or a Generac® generator is one of the best decisions that you can make to use your own power to stay warm and avoid blackouts. In this post, we’re going to be taking a closer look at why you should install backup batteries and generators for the upcoming season.

Texas Governor Greg Abbott is assuring the state of Texas that the grid will be prepared for the seasonal changes. Texans, however, are making the decision to install their own backup generators. Can the Texas grid be depended upon throughout the fall and winter seasons? Even the best laid plans, especially where power is concerned, can go wrong. For almost a decade, ERCOT has announced their seasonal forecasts. However, the grid operator did not announce it this year, and they don’t plan on doing so. The problem not only lies with the reliability of the grid, but also with rising costs associated with it. The Texas grid is not attached to any other electric grids because it is privatized; this means that the ERCOT grid, as of its deregulation in 1999, has been run independently by the state of Texas. This initially resulted in lower electric bills early on when the state was deregulated. No other state in the United States currently operates like this.

What does this mean for Texas?

This means that along with rising costs due to rising temperatures and expected harsh temperature drops in the winter, prices are rising even more for the people of Texas due to the amount of gas that is necessary to power the grid. While Texas powers the ERCOT grid independently, ultimately it is Texans who are paying the price for the demand. How do they pay the price? In an article written in February of last year, U.S. News and World Report found that “deregulated Texas residential consumers have paid $28 billion more for their power since 2004 than they would have paid at the rates charged to the customers of the state’s traditional utilities”. You can read more about it in the article through this link.

How can you avoid rising costs and blackouts? We have the solution: backup power. With backup power, you don’t have to worry about blackouts or staying warm during the fall and winter seasons. The power of backup energy is that you control your energy. You don’t have to rely on the grid or utility company in situations where you don’t have enough sunlight. With the upcoming cold season, backup power is something you may want to check out. In many cases, you can completely eliminate your electric bill when you install backup batteries with your Solar Powered System. On top of that, you can also keep your home or business powered with a Generac® generator if the power goes out.

When considering the rising energy costs and temperatures this past summer and the unknown nature of the Texas power grid and no future forecast for the upcoming fall and winter, it may be time to look into renewable energy. Installing solar in your home is not only reliable and affordable, but it gives you your own independence when it comes to your energy needs.
IES Texas Solar is here to work for you. With the most recent tax incentives such as the recent rebate program (the tax credit was raised from 26%-30% thanks to the Inflation Reduction Act), affordability, and reliability of solar energy, solar is more in demand than ever before. IES Texas Solar offers custom-built solar panel systems, as well as backup batteries and generators. Whether it is for residential, commercial, or even off-grid, we build it tailored to your needs. You can read more about solar tax incentives and finance options offered through this link.

Solar power gives you the freedom to use your energy how and when you want to use it. It’s your needs, your energy, and your team with IES Texas Solar.