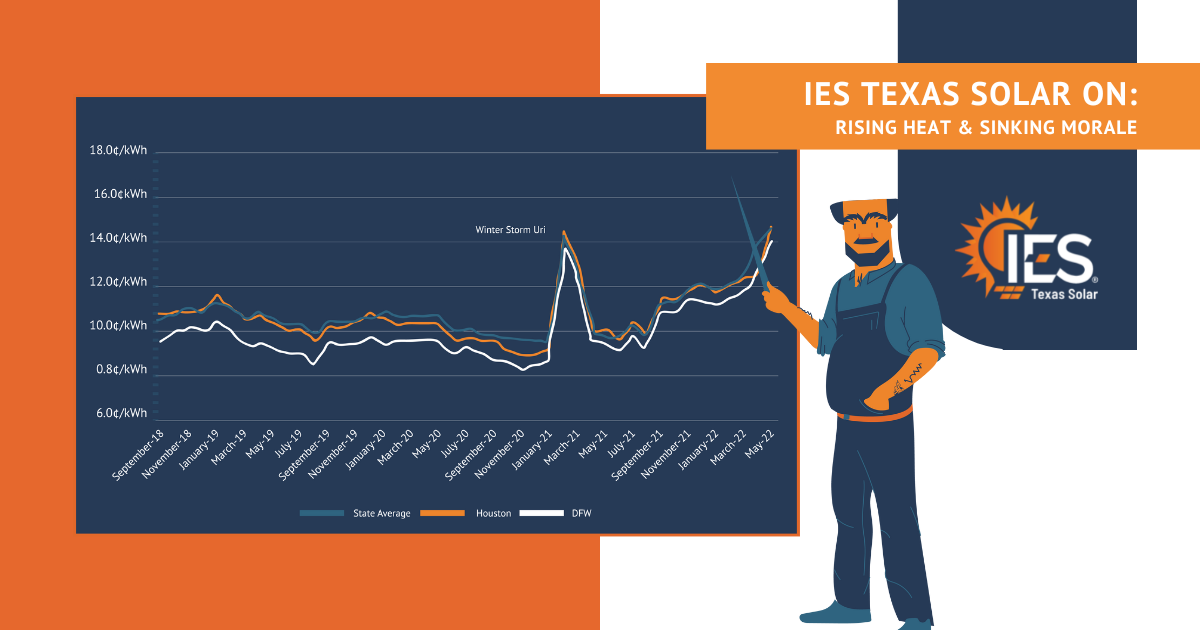 Bills Up 50% Amid Record Heat

Getting away from the Grid’s neglect with the options from IES Texas Solar can make you less dependent on their poor choices.

Texans are experiencing record temperatures in the 100’s and seeing energy prices skyrocket all over Texas. With the aging grid, poor maintenance, and gas prices on the rise, Texans are forced to bust their budget to cool their homes to remain safe. But when it comes to ERCOT and the grid, one thing is abundantly clear; safety isn’t free. We continue to bear the brunt of the grid maintenance, replacements, and good margins for power companies as they play catch-up. This definitely seems a little one-sided.

Articles from all over the lone-star state have stories about Texans having to make hard choices due to the grid and searing heat, such as deciding between mortgages or cooler environments for medical conditions.

In this post, we’re going to be covering the fact that the affordability of electricity through the grid and utility companies is becoming hard to find and that residents in San Antonio and Houston are experiencing massive increases in their energy bills.

According to an article published in The San Antonio Express, customers of the CPS Energy company have seen their bills increase by more than 50% in the last month. As the heat increases, customers need more electricity to power their air conditioners. Despite attempts to reduce power consumption by running air conditioners at 78 degrees and using natural lighting, power prices continue to skyrocket.

Texans Pay the Price for Expensive and Unreliable Power

According to an article published by Spectrum News, one of the reasons that electricity prices are increasing is because the price of gas is increasing. On top of this, the Electric reliability council has switched over to a more expensive “reliability model”, which further increases costs for Texans.

Many Texans have been put in difficult positions regarding the weather and their energy bills. During the winter storm, many Texans went without power for upwards of two weeks. Now Texans have to contend with scorching temperatures that are forcing many people into situations where they have to decide on whether they are going to dip into other funds like their social security payments just to pay their electric bills. Other residents suffer from health conditions such as respiratory issues and can’t breathe if they get too hot. Some residents have even seen their electricity bills triple since the winter storm of 2021 and have to use their social security payments to pay for power.

It goes without saying that Texans shouldn’t be subjected to these prices, let alone use money from funds like their social security to pay them. As we have written before, many Texans are being forced into bad positions because the cost of other necessities such as food and gas is also rising. The state is attempting to bolster its power reserves by using RUCs (Reliability Unit Commitment Orders).

These, as President of Hanger Consulting John Hanger says in an article published by Spectrum News 1, provide more power and have it readily available.

“The RUCs are an effort by Texas to have more power ready to go very quickly if needed,” said John Hanger, the president of Hanger Consulting. “They’ve increased exponentially. So that is a strategy or procedure that Texas is using to try to ensure that the lights stay on. [But] I think it’s the second- or third-best approach and with a lot of downsides to it.”

The issue that comes with running RUC’s is that they cause power plants to operate in a way that they were never designed for and forces them to put off maintenance. This can actually increase the likelihood of a blackout.

Hanger further stated that if Texas were to connect to the national grid, it would help the state’s electric reliability.

“Texas starts with that huge self-inflicted wound it has chosen to island itself. Every other state is interconnected pretty well with its neighbors, and indeed, states maybe three or four away from it. And that interconnection gives the other states in the union significant reliability benefits. Also economic benefit, it’s not only a more reliable way to operate any power grid, it’s a more efficient and lower cost way to operate any power grid.”

What can you do about it?

With the heat continuing to affect Texan’s energy bills, making the switch to solar may be the best solution for many Texas residents. Installing a solar-powered system can offset the massive energy bills that Texans are experiencing. No Texan should have to decide between having air conditioning or buying food or water. Solar can change that. If there is another power outage like the one Texas experienced in February 2021, then having a solar-powered system, backup batteries, and a Generac® generator could help residents keep the power on for weeks at a time.

Texans who switch to solar gain more independence from their energy company, reduce their monthly electric bills, and, as a result, have more money for other bills and necessities. This also means that Texans who go solar don’t need to sacrifice things like social security payments or retirement funds to pay their bills.

If your business is considering switching to solar, reach out to us by going to our website, iestxsolar.com, or by giving us a call at (855) 447-6527.