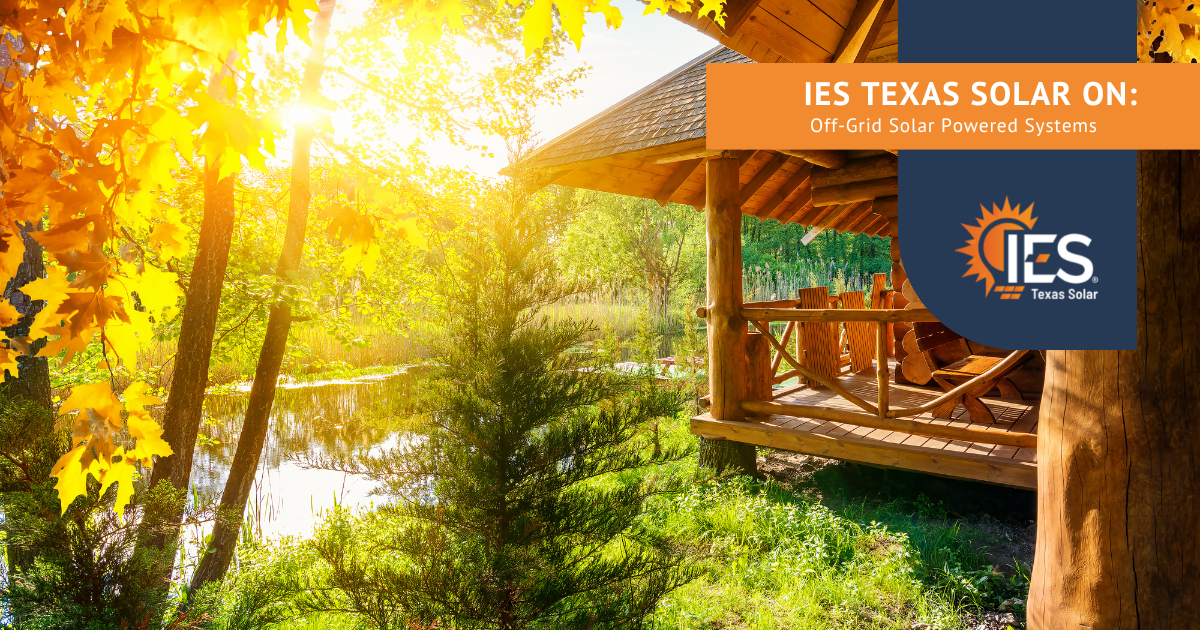 Energy independence is a hot topic these days, and not just because it’s summer time! When someone talks about installing solar, they usually think of it as a way to reduce their electric bills and to save a ton of money while going green. The solar powered systems that we’re talking about in today’s post certainly go a long way towards the goal of energy independence, but they take it to the next level.

Off-grid solar powered systems are solar installations that a big portion of customers ask about. These systems are especially appealing if you have ever considered moving out into the woods or the middle of nowhere and creating a self-sustaining patch of land just for yourself. IES Solar Consultant Kristen Killgore tells us about this independent and exciting type of solar installation and answers some questions that customers looking for this type of system need to consider.

“Off-grid solar is literally that you are not connected to the grid. Your whole solar powered system is based on what you produce yourself by solar panel, battery, and generator combinations.”

This is fairly straightforward, but the largest takeaways are that you are not part of the power grid, and that the keyword is ‘combination’. Before diving into what combination is ideal for off-grid solar powered systems, Kristen explains the reasons that these customers want to go off-grid. Customers need to think about what they really want their system to do along with the pros and cons of separating from the grid.

Why would a customer want to go off-grid? What are the pros and cons?

“I usually see people go off-grid to satisfy a certain lifestyle, try to be self-sustainable, or to live a minimalist lifestyle. There are definitely pros and cons, but normally the pros are that there is zero reliance on utilities, which provides a great sense of freedom and relief to a lot of people. It’s also a lot less intrusive to have an off-grid system than it is to bring the grid to a remote area. That’s a ton of infrastructure. It’s important to mention because privacy is an important feeling to maintain for a person that seeks remote living and is one of the reasons they usually want to be remote. They don’t want to bring in underground gas or electricity because they don’t want people to know that this land exists.”

“Occasionally we have customers who are living or building in a very remote area where it would cost more to bring the grid to them than going off grid. Even if it gets to the point of being half the cost, I still see customers wanting to go solar. You might as well spend a little more money and install an off-grid system instead of paying more than that cost just to get the grid out to where you are. It depends on the customer, but it’s definitely a lot more than people think. I know that if you’re in certain areas that are being developed that sometimes homeowners will share the cost of bringing the grid over with neighbors. It’s definitely one of the reasons that people go off grid.”

What does a customer need for a winning combination? Can they just get solar panels and a generator? Are batteries required?

“Off-grid is complex and very modular. It depends on what you really want it for. That’s why it’s good to talk to someone that has experience in off-grid. You could have an off-grid system with just solar alone, but I don’t think that would be very common here in the US. What that would entail is that you don’t have an inverter and that the only electricity you would be consuming would be D/C. That means that all of your electrical items would have to be D/C, and when the sun goes down or you have inclement weather then you would be without electricity entirely unless you have some sort of storage system like batteries or you have a backup generator.”

“The combination of both will always give you the best solutions for every situation to power your home, and depending on the situation, one is going to be better than the other. Sometimes you’re going to have inclement weather and a battery isn’t going to be very effective because the solar panels won’t be producing as much to be able to charge them. You’ll want generators to turn on during inclement weather during the night time. One benefit of having a generator over batteries though is that batteries are more expensive. Batteries are the most expensive part in an off-grid system. So if they’re on a budget, sometimes customers would decide to have less battery backup and have a generator to supply their needs and power when their batteries run out. It really depends on how much autonomy they want, and batteries give you more autonomy.”

“If you want an off grid system, you need to have a conversation about it with your solar consultant. It really depends on what you want. Do you want to have your generator running a lot or do you want to have your batteries maintain most of your energy needs when the solar isn’t producing power? That’s usually going to cost more, but if you think about it when it comes to a generator, the generator also costs money when it comes to fuel. So in the short term, the batteries are going to be more expensive, but in the long term, if you’re using a generator a lot, it’s going to add up a lot because of the fuel that you are constantly having to use for it.”

“Speaking of generators, we usually add an automatic generator to an off-grid system. These would turn on as soon as they are needed. These run on propane or natural gas, either one can be used. Normally, it’s going to be propane because you’re in a remote area and you don’t have natural gas that’s being pulled underground to where you are. You need a really good, large automatic generator if you are living off-grid because you don’t want to manually turn on your generator every time you need it.”

What would someone need to ask or consider when installing an off-grid system?

“It’s different because you’re not connected to the grid and normally for most installation companies that are installing off-grid, they require the customer to already have the electrical infrastructure in their home. All of the wiring inside your home has to be done before an off-grid installation happens. Their job is to power that main service panel, not to wire it up.”

“The start is usually a conversation or many conversations with the customer. It’s basically conversations about lifestyle and what they want to have running in their home. It is vital to be thorough during this stage because this analysis determines the entire system size. I find it very important that my customer’s systems meet their expectations and are aware of any lifestyle changes that may be required for budget or system limitations. It is within these thorough conversations that allow these results!”

“I get a lot of customers that ask about off-grid. With this, I like to use the comparison of people who want everything American made. It’s a really nice idea and it’s a good thing to strive for, but if you’re really serious about it then you have to pay a lot more for it than you would with any other type of system for the most part. When it comes to all American made, it’s usually expensive just based on the demand. If you really want it then you are going to have to pay for it.”

While off-grid solar can be more expensive, it is important to remember that IES Texas Solar provides many flexible financing options that make the perfect off-grid system a reality. Learn about them here!

“The solar consultant is going to need to ask ‘what’s your budget’. The reason that they ask isn’t that they are trying to max out that budget as much as possible, it’s that they’re trying to figure out if you have realistic expectations, so part of that discussion is to bring them to a realistic level. Let’s say you have a budget of $50,000 but you want to live like you never left the grid. That’s not going to be possible. If you want to live like you never left the grid, the cost for that is usually outside of most customer’s check books. But really the conversation is about minimizing consumption and educating the customer by asking them ‘what’s really important, what do you absolutely have to have, and what could you just get rid of?’”

What is it that IES does that makes it unique with off-grid solar? What Gives IES that edge?

“IES definitely stands apart from other companies. The consultants are very knowledgeable on all types of solar designs and equipment so that we can really personalize and design what is best for the customer. The majority of solar companies out there, be they residential or commercial, usually don’t wander off from a cookie-cutter design. Usually changing solar panels and system sizes is about as custom designed as they get. They might have some residential batteries, but that’s usually only one type of battery. IES is very experienced with grid-tied hybrid and off-grid systems. For example, IES is knowledgeable and capable enough to know when it’s beneficial to install one type of inverter or battery that is made for a more high amperage home and a battery that would benefit a high-usage home. We don’t offer just one battery or a one-size-fits-all design.”

“We are very open to having conversations with customers that really want to go off grid. From my experience, the majority of customers that we get that want to go off grid have already asked other companies to install an off-grid system for them only to have the companies automatically turn them down. There are certain batteries for certain things for grid tied versus off grid and we have such a diverse amount of equipment, knowledge, and availability of this equipment at a competitive price that we can put together whichever type of system the customer needs. We want to make sure it’s right, so we’re patient and we care about the customer and what they want. In my last off-grid job, I worked with a customer that we had three or four long conversations with so that we could get him to the right size that he needs, and that’s what IES is about. We care about that. It’s not about making a quick buck for us.”

IES Texas Solar has the edge on the competition because they take care of ALL customer needs, especially the unique ones. Every customer is able to get exactly what they want.

“I love IES. When I moved from Arkansas, I had some expectations for what the company is and after interviews with different solar providers, I chose IES because of how they take care of their customers, their huge knowledge base, and how long they’ve been in business, which is around 48 years. I felt really good about them and how they take care of their customers. That’s why I’m here. If anyone is interested in going off grid, we can always give them the best solution.”

If your business is considering switching to solar, reach out to us by going to our website, iesenergysolutions.com, or giving us a call at (855) 447-6527.